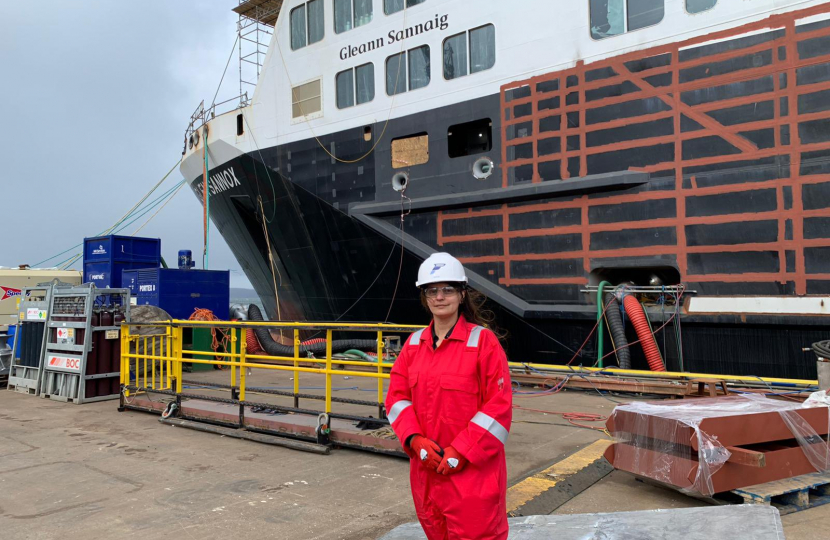 Island communities have spent years waiting for the high quality, reliable ferry services they were promised, but right now they are having to sit and watch the SNP Government blame anyone but themselves for failing to deliver this. But despite the First Minister trying to claim that responsibility for this fiasco lies at every door but hers, the truth is that it is this SNP Government who have failed island communities for years – and continue to fail them now.

The Ferguson Marine shipyard has found itself sitting in the eye of a political storm over recent weeks. The report by Audit Scotland, which investigated how the shipyard was awarded a contract to build two much-needed Calmac ferries, has seemingly raised more questions than it answered.

Ferguson Marine once stated that these ferries ‘will become the jewels in the CalMac fleet’, and indeed I hope this statement still turns out to be true. But this quote is from back in 2018, at which point the vessels were expected to take only a further 18 months to complete – and this was after the vessels had already suffered lengthy delays.

It is now 2022 and neither vessel is close to seeing active service, with total costs currently sitting at an estimated £250 million - around two and a half times the original anticipated cost, and with zero new ferries to show for it.

Given that effective ferry services are a fundamental part of day-to-day life for many people in our island communities, it is vital this shipyard sees no further delays.

This is why I was pleased to be able to visit Ferguson Marine this week, where new CEO David Tydeman and his team provided a hands-on tour of the site and the work being done on the ground to get these vessels seaworthy. It was interesting to hear about how and why this project has gone so wrong thus far and, more importantly, what they are doing to fix it and ensure that no additional taxpayer money is wasted.

There are many reasons why these ferries have run so far over their initial cost and why, for example, labour costs alone have gone up five-fold from £11 million to £55 million. During my visit, I heard about some of the inefficiencies hampering Ferguson Marine, and how much of the site appears to have been designed by someone who lacked shipbuilding experience.

But I also heard about some of the positive steps being taken to secure the site’s future as a successful, sustainable shipbuilder. While the new CEO was clear that Ferguson Marine can never be proud of how the first ferry has been built, he was also clear that it is not too late for them to be proud of how the second one will be built.

The site is also keen to take advantage of the opportunities presented by the UK Government’s National Shipbuilding Strategy, which they are confident will go a long way to ensuring a prosperous future for the UK’s shipbuilding industry. I certainly hope these ambitions prove to be successful - as a West Scotland MSP, I would love to see this Port Glasgow site become an example in high quality, effective shipbuilding.

But for now, the focus must remain on completing these two ferries and having them serve the island communities that depend on them. These communities do not care for excuses. They do not care for blame-games. They want – and indeed need – the SNP Government to step-up and deliver the services they need.

We will continue to hold the SNP to account for their catalogue of failures on this issue, and ensure that their obsession with constitutional grievances does not continue to distract them from delivering for communities across the whole of Scotland.