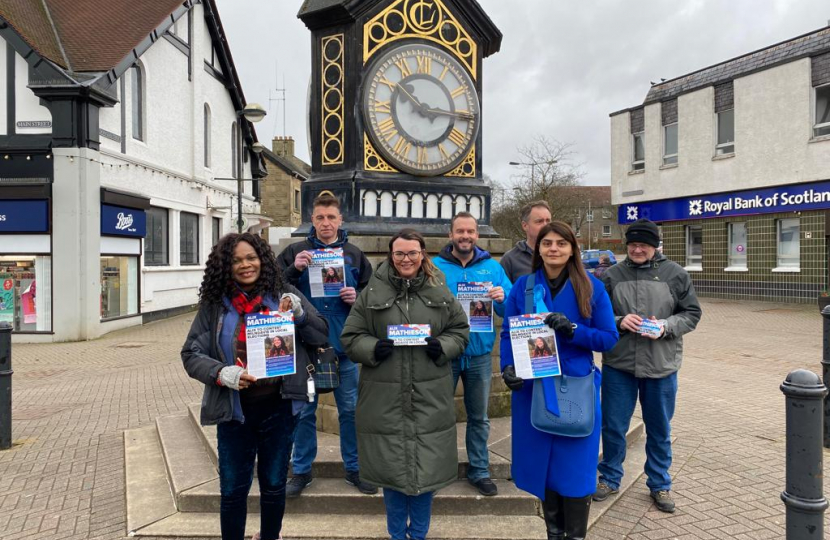 In these elections, the Scottish Conservatives have delivered, a comprehensive manifesto that is packed with new policies to put local people, and local issues first.

The Scottish Conservatives are proven to deliver better local services, at a lower cost to the taxpayer, than any other party. Meanwhile, the SNP are cutting local services, and hiking council tax. In my opinion, it’s an obvious choice. But if you are not convinced, then I will take this opportunity to outline more reasons why the Scottish Conservatives should be your first choice.

For years, the SNP have looted local council budgets to pay for their pet projects, meaning local services - such as education, housing, bin collection, and economic development – have suffered. One such project would be the Ferguson Marine project, which is 2.5 times over budget and could yet see costs soaring to £400m. This additional £300m could have covered the current financial deficit that local government is facing.

The SNP have consistently failed to provide local government with a fair budget settlement, seeing a real-terms cut of £251m in the 2022-23 budget. In many cases, this leaves councils with no choice but to cut back on essential services.

The Scottish Conservatives have long been pushing for local councils to have more autonomy. However, by slashing local budgets and local services, and then delegating more powers to local authorities; the SNP have left council’s shielding the blame for the shoddy budget.

The Scottish Conservatives rightly believe local authorities should have more power and autonomy over their budget, which is why we are bringing forward a Bill to ensure councils receive at least a fixed percentage of the Scottish Government’s budget. This Bill would see councils decide where money is best spent, as opposed to inconsistent sums of ring-fenced funding.

Education is arguably one area of ring-fenced funding that does receive considerable sums, but it’s how that money is used to better the education services, which differs your local Conservative candidates from any other party.

The education budget constitutes a large sum of local councils’ ring-fenced funding, but Scottish Conservative-run councils spend that money more effectively, than Labour or the SNP.

It will be no surprise to many of you that standards in Scottish education have slipped, but it is unnerving to think that more than 40 per cent of Scottish schools have not been inspected in the last 10 years, so it is hard to tell just how far these standards have fallen.

What we do know, however, is that school pupils in Scottish Conservative-led councils rate their schools higher than in SNP or Labour-led councils, with these pupils also being 5 per cent more likely to meet key developmental milestones.

The Scottish Conservatives have consistently called for independent school inspections, and finally the SNP have succumbed to our demands. It is time to right the SNP’s wrongs with education, and it is Scottish Conservative councils that will put education at the forefront of their priorities.

When it comes to social care, many people are quick to jump to the conclusion that Labour is the party to deliver on social care, but this is not the case. The proportion of care services graded ‘good’ or better by inspectors is around 5 per cent higher on average in Conservative-led councils, compared to those led by the SNP or Labour.

Adults supported at home were also more likely to agree that Conservative councils support them to live independently, and that their services and support had an impact in improving or maintaining their quality of life, compared to those run by the SNP or Labour.

Now, on to the topic of cleaner streets – something which dominated the news throughout COP26 proceedings. The three worst councils for fly-tipping in Scotland are all led by the SNP.

But as well as fly tipping, there have been one-too-many reports of vermin flooding streets and households, which can be a biproduct of bins not being collected frequently enough.

But the SNP local election manifesto does not even mention the word ‘bin’ once, and it’s obvious that having clean streets is not a priority for the SNP. But analysis shows that Scottish Conservative-led councils collect all major bins more frequently than SNP and Labour-led councils.

Unfortunately, lockdown restrictions have seen high streets become ghost towns, and local facilities shut or run down. The SNP and Labour are slow to invest in sports facilities, museums, and parks. Whereas, the Scottish Conservatives fund parks and open spaces by over £800 more per 1,000 population than the SNP, and a staggering £3,000 more than Labour councils.

Local facilities are key to ensuring our local community have places to frequent, our children have areas to play, and our youth have designated spaces to keep them occupied.

When it comes to local economic development and tourism, on average, Conservative-led councils spend over £37,000 per 1,000 population more than their SNP-led counterparts, and £46,000 more than Labour-led councils. If you want to see your local area vibrant, brimming with activities and bustling with jobs, the Scottish Conservatives are the party that will prioritise this.

Many of you will be drivers, and if you are then I advise you to read closely, because the SNP are trying to punish motorists into giving up their cars - whether that be by sheer frustration due to poor quality roads or hefty the dreaded Car Park Tax that some SNP-led councils are threatening to introduce.

Drivers in Scottish Conservative-led local authorities are less than half as likely to be struck by damaging potholes as they would be in SNP and Scottish Labour run council areas, and the worst local authorities for pothole compensation claims are run by… you’ll never guess… the SNP and Labour.

We want to create a pothole action fund to fix local roads. We want to scrap parking charges in public car parks to encourage high street shopping. We will not be imposing the workplace parking levy which could cost scots up to £14million.

It is abundantly clear by this point that the SNP are anti-driver, and anti-business. These charges will only make it more pressing for high streets to encourage shoppers, and will impose more charges on businesses already hard-hit by the pandemic.

The Scottish Conservatives believe people should not be charged simply for driving to work. On the contrary, we believe we should be doing everything possible to ease pressures on people and businesses.

For example, the cost of living crisis has seen tax hikes across the country, and we want to alleviate this for as many people as possible. This is why we would increase the current single person household discount from 25% to 35%, when the funding is made available. This would equate to a council tax cut for one million people.

This summary of our key policies will hopefully lead you to the conclusion that, for local action on local issues, you should vote for your Scottish Conservative candidate at the local elections on May 5th.

Visit the Scottish Conservative website below to learn more about what we’re offering in this election.